We Are In The Time Of Evil Clocks 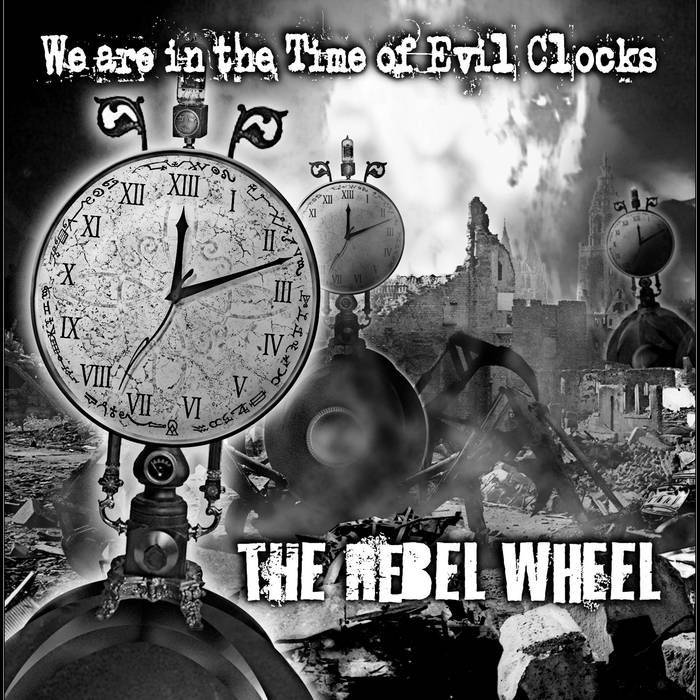 We are in the Time of Evil Clocks was the third album from The Rebel Wheel and the second to be released through 10T records. It is many things but mostly it is a study in contrasts. Songs like "Scales", "Wordplay" and "Settling of Bones" are very tonal in nature and follow a fairly traditional poppy song structure. Contrasting that are songs like the title pieces book-ending the album, which are more electro-acoustic outings than anything else, although even here after the electronic intro, the verses of part 1 are dissonant and odd-metered whereas the choruses are tonal and in common time.

The epic piece "Discoverie of Witchcraft" exemplifies this contrast in an even more direct manner. The piece is cast in seven movements. Basically it follows a symphony form of four movements, the first being a sonata-allegro, the second a sonata-rondo, the third a scherzo and the last another sonata form, but these four large pieces are interrupted by three small folk-song styled acoustic pieces (Hags 1,2 and 3). The four larger pieces all use tone-rows as the basis for their composition and while exuding a hard-rock aggression and flaunting a plethora of odd-metered riffage, are at their core, atonal 12-tone compositions. The smaller Hags pieces are strictly diatonic and strongly rooted in a key. These disparate timbres contrast each other strongly and cause a strong motion of tension and release.

The idea for the epic suite, Discoverie of Witchcraft was inspired by Robertson Davis' A Mixture Of Frailties, and like the story uses texts from Ben Jonson's Masque of Queens and is framed around Reginald Scot's sceptical book, The Discoverie Of Witchcraft. Unlike the composer in the story I use a lot of wrong-note dissonance.

The idea for the Evil Clocks frame work was Nick Brisebois who at 11 had written and illustrated an interesting story called We Are In The Time Of Evil Clocks.

The album was recorded by the band live off the floor (as much as possible) in various studios around Ottawa. They returned to Shattered Wing for some of it, did a whole lot at Fiction Music Productions and also recorded a fair bit in sax/vocalist Angie MacIvor's rehearsal studio. With the exception of Settling of Bones, which was all played by David Campbell and sung by Ange, the band used no click tracks and let a certain amount of tempo disparity reign. Even at that, the groove is solid and when David tempo mapped some songs in mixing (to have delays follow the beat etc.) it was found that the tempi varied very little in the course of, in some cases, an eight minute excursion. Nathan Mahl members (a band David was also in at the time and Claude had been in previously) were guest musicians on "Evil Clocks Part 1" and "Scales of the Ebony Fish". Artist Francis Dupuis did the graphics. More information on the recording process can be found on the band's blog

The album was released on June 16th 2010 and has been the band's most successful outing. On the strength of that album they were invited to play Progday, Rosfest, Progtoberfest, The Nuance festival, and over thirty gigs in Canada and the States.